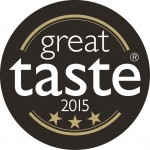 Great Taste Awards, organized by the Guild of Fine Food, is the acknowledged benchmark for fine food and drink. It has been described as the ‘Oscars’ of the food world and the ‘epicurean equivalent of the Booker prize’. Established in 1994, it encourages and mentors artisan food producers, offering a unique benchmarking and product evaluation service (you may find all 2015 results here)

In 2015 over 400 judges, including specially trained food writers inputting judges’ comments, came together at 49 judging days from March until early July to meticulously taste all products and select this year’s winners. Within the 10.000 food product entries from around the world only 130 foods achieved the highest and most coveted rating, three stars. There were 597 foods grabbing 2 stars and 2382 were awarded a 1 star. That means only 31% was accredited – it is a tough call indeed.

At the finishing line of this marathon like judging process three (3) of our products were awarded as follows:

Guild of Fine Food Chairman Bob Farrand added: “To be awarded Gold in Great Taste is a significant achievement – it is no easy win. Only the very best products entered receive an award after being judged by a minimum of 12 of the UK’s finest palates.”

Winning these awards certifies the high quality and exceptional taste of our products and we are extremely proud that our commitment to the ancient art of artisan cheese making is rewarded.

In the attached files you may find all relative competition & awards material as well as a press releases you are more than welcome to use.